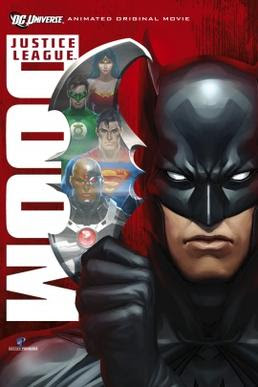 Ah. Welcome once again to Comics On the Screen. Tis I, Frankie Rodriguez (also known to many as Seraph) here to give you another review of a comic book related feature. So, I guess you are wondering what feature we are going to examine this time. Well … I can say it in 3 words:

Yes. The final work of the late, great Dwayne McDuffie as well as a loose adaptation of Mark Waid’s JLA storyline “Tower of Babel”, Justice League Doom deals with some very interesting tactics used against them. And while the tactics seem effective, the source of those tactics are even worse. Warning, SPOILERS ARE ABOUND. Confused a little? Then allow me to explain as we dive into Justice League: Doom.

Our film starts the way all good films from DC Comics films start of late . . . with a robbery. And while there seems to be some very interesting things going on . .. like Batman seemingly walking through a solid wall .. . WHAT THE . . . as we see who the robbers are. And oddly enough, instead of one playing card type villain behind this heist, it is several. Yes. We see the Royal Flush Gang going after diamonds. After a brief scolding from Queen, Jack takes a look around.

And Batman makes his way down … after dodging a blast from Jack. After rough landing, Jack states that he’s gonna kill the Bat and that’s when we see the rest of the team. Well . .. most of team except for one other member.  Green Lantern Hal Jordon, The Flash Barry Allen, Martian Manhunter, Wonder Woman & Superman himself.

There are a few quick quips traded amongst the League; Hal telling Batman many how many times he’s saved his life; Martian Manhunter teasing Superman about being sucker punched by Ace the last time they fought the Royal Flush Gang. The two groups go into combat and we see some great scenes. Like Wonder Woman using her lasso like whip against Queen or Hal Jordon vs 10 and my personal favorite . ..

Superman channels his super testosterone to give Ace his best “I AM A MAUN!!!” punch . .. right through Ace!  Geez!

As the rest of the Royal Flush Gang goes down, King seemingly gets away. I say seemingly cause when the League regroups to go after him, they are met outside by their final Leaguer, Cyborg. And Cyborg had knocked out King. Yay!

The League looks over a machine that allowed the Royal Flush Gang to make the wall of the bank intangible in the first place. Batman states that they should look for clues when Diana reminds him his hurt. But does Batman listen … no. Then he says he should check out the machine when Cyborg tells them that there are  .. .. 38 … whatever is above a Tetrabyte, worth of data to go over and that he’ll call him as soon as he’s done. And with that, Batman takes his leave, as does the rest of the League.

Wait a second. Batman seen something in the mirror for a second. It was there and then it wasn’t. Who could that be?! Batman makes it home where Alfred forces Bruce to bed. Out of the Mirror we hear . .. Mirror Master. Oh wow! That’s awesome cause he talks to someone quietly as he seeming takes information from the Bat Computer .. . completely undetected.

After that, we find ourselves in a swamp. And suddenly we see Bat-villain Bane fighting off a tiger. He is soon joined by Star Sapphire, Metallo, Ma’alafa’ak (another  Martian like Maritan Manhunter … but EVIL) & Cheetah. They all said they were told to meet there and before they leave, a giant dome structure comes up from the ground. A  . . . some what familiar structure.

The villains enter within where Mirror Master is standing by Vandal Savage. Savage offers the villains a chance to help him on a later project but the job for now is to take out the Justice League. And he offers each villain $100,000,000 . .. a piece for each leaguer they take out.

*The Emperor from Star Wars comes out* “ Yes. Let the hate flow through you.”

Anyway, the villains are not retarded as they take up Vandal Savage on the offer. And what commences is by far one of the sickest, more twisted and beyond glorious schemes in history.

This is a first for me. This movie is, as of right now, the best DC Animated film they have EVER made. No ifs. No ands. No butts. I normally do not have a problem giving spoilers but by the Matrix, I cannot reveal this movie. 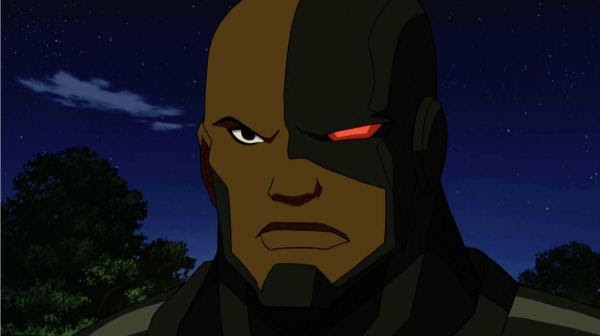 The pacing in this movie was exception. From start to finish, it was a roller coaster ride that just felt so good that you wanted to ride it over and over again. The animation was crisp, colorful and set each tone and each hero and villain perfectly. Motion in this movie was like water when it needed to be or like truck when it had to be. Every frame filled with pure unadulterated awesome.

The plot came from Towel of Babel but the late Dwayne McDuffie and the rest of the writing team of Justice League Doom transformed this into something that can stand on its own as a different story from Towel of Babel, just using similar plot devices and points. Spoiler: The fact that Mirror Master successfully infiltrated Batman’s lair, took the information he needed and returned to Savage undetected was genius. One of the biggest selling points was the actual information being that Batman had made plans on ways to take down every member of the Justice League (save for Cyborg, who had just joined). Vandal Savage used that information and twisted it for his own purposes. And  that is what made Doom such an incredible viewing experience. 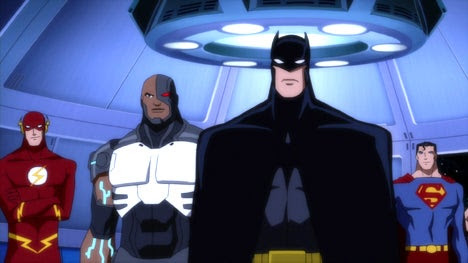 The tone shifts in Doom keep you at the edge of your seat. From the light hearted banner at the beginning between Hal and Batman to the (spoiler) Brian DePalma like scene where Superman is falling after being shot with a Kyptonite bullet; and believe me, that is NOT the most amazing thing about the movie but the music, animation and cuts scenes during that one sequence helped elevated this movie into DC’s top animated film.

The voice cast was BEYOND Superb. Many Justice League alumni were here as Carl Lumby returned as Martian Manhunter alongside Susan Eienberg as Wonder Woman. Michael Rosenbaum returned to Flash but was a different Flash; most notably known as Wally West, Rosenbaum excels as Barry Allen in Doom. For what might be the first time in a Justice League movie, Tim Daly is Superman; playing the character to the tee as always alongside the voice of animated Batman for the last 2 decades, Kevin Conroy. Conroy gave a great intensity to his role, with the personal implications during his  particular problems during Doom. Nathan Fillon, once again, plays Hal Jordon and once again Fillon’s Jordon is perfect. No other actor has been able to cover Hal’s multifaceted character as well as Fillon and it really shines during Doom. Bumper Robinson’s Cyborg was more than worthy of the character; letting him be smart, strong and really finding his way with this team. And these are just the heroes.

The villains are equally as exquisite. Carl Lumby also played Ma’alafa’ak, giving a slightly darker tone to the voice that was seductive in its own way. Carlos Alazraqui gives an outstanding performance of the Man who broke the Bat back in the comics; even giving us some great voice range. Alexis Densof (aka Mr. Alyson Hannigan) performs a wicked Mirror Master who seems deadpan with his delivery but the voice hints at the twisted man that Mirror Master is. His scenes with Rosenbaum’s Flash were amazing. Oliva d’Abo’s Star Sapphire was the epitome of a woman scorned; sexy, angry but sly. Paul Blackthorne’s Metallo was so welcome cause it fit him; a psychotic human inside the body of a robot who hates Superman. Phil Morris gave one of his best performances as the ruthless, upper crust Vandal Savage. He tapped into something because his Savage felt real. Yet, the MVP of the movie in terms of voice cast goes out to Claudia Black. Her Cheetah was DEAD ON. Never has a voice fit so well with a villain. Black’s Cheetah was sexy, vicious, cunning and intelligent and the movie allowed her to show that. The chemistry between Black’s Cheetah & Eisenberg’s Diana alone is worth watching the film. They embodied the long time foes so well that you want more of them. I want another movie with Black’s Cheetah alone.

The movie is a triumph in all respects. Timm, Romano & McDuffie gives us a movie that WILL be a classic and a new standard bearer for DC movies to come. You will NEVER guess at how things happen at the movie. Things you think are predictable are not. Not Savage’s true plan. Not the ways the League are taken out. Not even what is going on. You will be surprised over and over again. A strong plot, excellent pacing, exquisite animation & a voice cast that will make fans wet their pants in delight; I cannot recommend this movie enough.

So It is my honor and great privilege to give Justice League Doom a 7 out of 5 Rating. YOU MUST OWN THIS MOVIE AND SHOW IT TO EVERYONE YOU KNOW! And with that … I am gonna go watch it again. Lata!

Posted by The Broken Infinity at 12:00 AM