Under the Net #14: CURSE OF THE BLACK TERROR

Under the Net with Jake Estrada

Curse of the Black Terror

Welcome to the 14th edition of Under the Net. 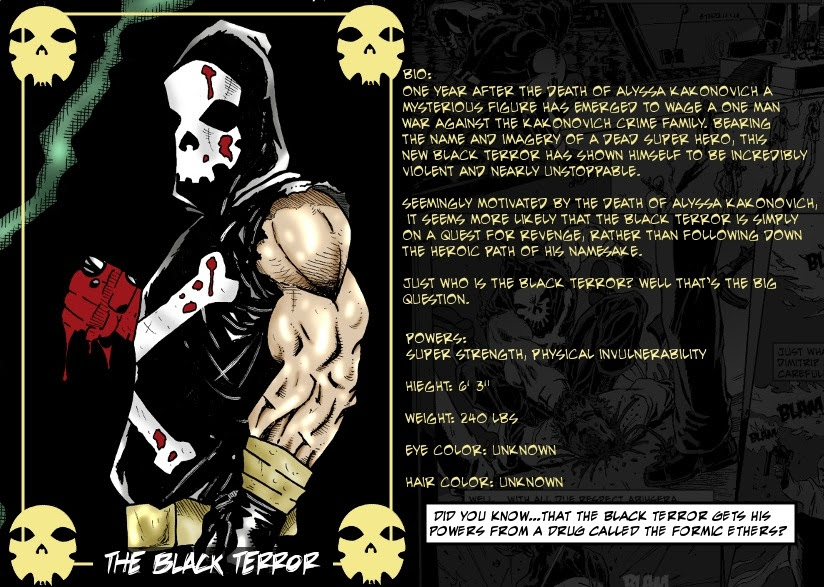 I will be rating the elements of the book on a scale of one through five.

One is poor, two is mediocre, three is fair, four is good, and five is excellent.

Hey everyone. I hope everyone is doing well, and that they have been enjoying their day. I have been doing well as I sit here looking out the window, seeing the people sweat. Ah, the beautiful sunshine state called Florida. Meanwhile, today’s focus is on a title called the Curse of the Black Terror. It is about a golden age hero, and there have been plenty of takes on this character. This time around the author, Curtis Lawson, has taken the character and made it a legacy type character. It has ties to the original because it mentions Bob Benton and it goes from there.

If anything else, this isn’t your daddy’s Black Terror. This is a Black Terror on steroids and willing to rip off an arm to get the job done.

Lawson has gotten the help of plenty of different artist in the various chapters he has done.

Chapter 1: Kundo Krunch did the art, and colors and lettering were provided by Curtis Lawson. The art has that Michael Golden quality with that sort of bigness flowing from the comic.

Chapter two was drawn by Daniel Dare. The art had a very old-school style with the coloring, and it wasn’t quite my cup of tea.

Chapter three was drawn by Nathan St. John. I found this art very original, dirty, and ultimately breathtaking. I loved the coloring and the starkness of it, and it really had me racing to read through the entire sequence. I loved it.

Chapter four was drawn by Antonio Rodrigues, who had a very nice and clean style. I liked how the panels worked in this sequence of the story. It was nice.

Chapter five was drawn by Vasir Fajardo, which just takes me back to real classic style of art that doesn’t motivate me in a lot of ways. It helped pushed the story forth, but it felt old.

Chapter six was drawn by Christian Navarro, and it had that old style I am not to big on either, but it helped push the story forward.

Chapter seven is drawn by Josh Hood, and I must say this was a beautiful sequence. I loved the colors, and I loved how it flowed from panel to panel. You could feel the energy on these pages, and it was very clean. This was an awesome part of the series.

Chapter eight picks up seconds after chapter seven left us hanging, and it is handled by Chris J Fredricks. I must say that it was a nice chapter following the Josh Hood pages. It fit well, and it continued to go with the flow of the comic. I deeply enjoyed these pages as well, and it was beautiful. Fredricks did a great job keeping the flow up on this sequence.

Chapter nine had art by Kay. The art was interesting with the purple and such. I liked most of the art, and it helped with the confrontation between the Terror Sidekick and Abe.

Chapter ten was done by Jae Ray. The art was done in an old style, but this time around the colors really made it feel like it was a classic comic done during that period, and it really worked. I enjoyed it tremendously and felt it helped with this story so much more.

Chapter eleven starts off with another artist again, and it was a double-size amount of pages by this artist. It was drawn by Stephen Holcomb II. Now this style was good as well, and it continued to move the story, and I loved how it played out.

I have to give Curtis Lawson credit where it is due. Sure, he takes some of the tired themes of using the Golden Age characters and such, but he has made it his own. The redesign of the Black Terror has made a fun and easy read. I know I read the pages very quickly, and I enjoyed it. I liked how it went on, explained a few things, and it had that nice flare to it. It didn’t take itself too seriously and it was great.

Some will say that the story is not very original, but it took a tired concept that has been revived by a lot of people and given it a twist. I like how the character is made into a legacy character. I like the redesign work of the Black Terror’s outfit by Kundo Krunch, and I just like how Lawson writes this series. It is fun and you can’t take that away from this title.

The book has had some good talent work on this book. It has great chemistry, and there is plenty to like. The writing is top-notch, and it keeps the story moving. There is never a dull moment.

I think some people would have issues with the art and its change with each chapter, which tended to be 4-5 pages. I am not totally bothered by this because the comic is done by an indie underground guy with little to no funds to pay his talent. The writing helps stick it all together.

This comic is fun, and you should read it. You should contribute art pages to the story, send in fan art, write the writer your letters of praise because he is having fun and it shows. I will continue to follow this series and, maybe one day, help draw an arc if the creator would like me to do it. Hey, I can only wish. Keep up the great work Mr. Lawson, I love it. J

Jake Estrada is a published author who holds degrees in Multimedia Design and Criminal Justice. He is a father to three wonderful children and married to his beautiful wife, Beth. You can find his comics at http://graphicly.com/estrada-mediaand other fine online stores.

Posted by The Broken Infinity at 12:00 AM