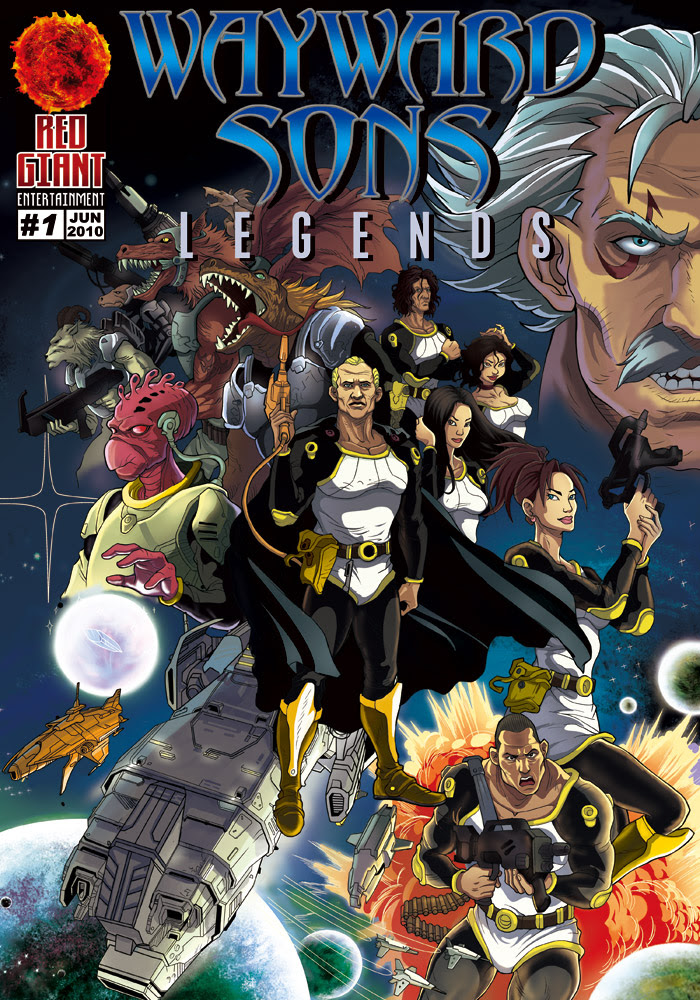 Hi faithful and new readers of TheBrokenInfinite. Jeremias here, and I'm back with another webcomic review. This time we're looking at Wayward Sons, a science fiction comic written by Benny R. Powell.   Well, this one is quite big, so this review is going to be based on what I've read which were the first five issues.


The main premise of the story are that a race of sufficiently advanced aliens crash land on Earth around 5,000 years ago and during the crash landing gain super human powers. When these aliens display these powers they are revered as gods. If you're familiar with Greek mythology you can tell which gods they're supposed to inspire. At least out of the Greek pantheon. As the comic goes along it shows that some of these aliens inspire more than one pantheon. Don't want to give a lot of major spoilers but one of the characters named Hurk does some things that from the issues I have read inspires not only Greek myth but two other mythologies as well.

Basically some thousands of years ago a group of what are essentially police, or the military, or military police are escorting some very dangerous criminals. As expected in a sci-fi action comic things go wrong and they all crash land on earth. The good aliens are called the "Ulympeans", so named because their ship was called the Ulympea. The criminals are called the "Tytans". Over the course of the story the Ulympeans and the Tytans will discover the nature of their powers and will go about using them not only to fight each other but to either help or harm the people of earth. Their actions will go on to inspire myths and legends.

The story has a nice and well balanced blend of action, humor and drama. The story isn't really dark, but can get somber without being melodramatic. The comedic moments are funny, and the action is far from boring. Especially with the powers these characters have.


The art is very clean and vibrant. Nothing looks crudely drawn everything looks to not only be detailed but proportionate, this goes for the scenery as well as the characters. The colors are beautiful, personally they're what catch my eye the most. The colors always command my attention and I don't want feel like looking away from the page or feeling like the art is boring me. Vibrant pretty much is the word to use when describing the art. Thanks to the colors the world that all these characters live in feels alive.


The characters are what this story is all about and thankfully they're all interesting. Whether it be the strong and noble Hurk, the flirtatious jokester Hermaz or the captain with a heck of a complicated past Suras you will come to care about them and they won't feel boring. Which I have to say is a bit of an accomplishment with a cast as large as this usually some characters are bound to not feel as developed and interesting as others.


If you're a fan of sci-fi and various mythologies of the ancient world, especially Greek, there really isn't any reason to not point your browser to this webcomic and start reading. The characters are likable, the art is great to look at and the story has some nice twists on the stories you've heard before.

Also if you're interested in picking up print versions of the comic if you don't want to always turn on whatever device you use to surf the internet with they have a nice store where you can do just that. You can find Wayward Sons here:

If you want to follow me on twitter and know what I think of comics and everything in geekdom go to twitter.com/ikariradio

Also check out my podcasts The Ikaricast on iTunes and check out Morphin Bracers on rajionihon.ridersrangersandrambles.com

Lastly go to my deviantart where I take commissions, cheaply. fighterxaos.deviantart.com
Posted by Unknown at 12:00 AM