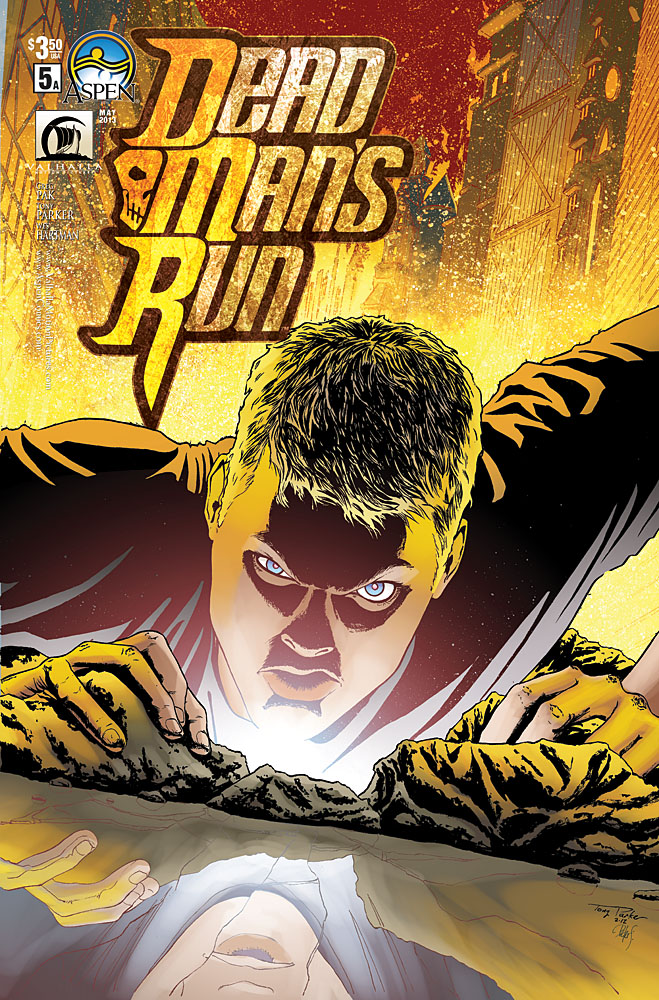 Our issue opens with the demons of hell going nuts now that the Warden is dead. Sam, Clara, Morazzi & Helen try to fight back the demons while chasing the Captain, who has kidnapped the innocent, Sam’s sister Juniper. As the Captain reaches the City of , where he is allowed by the General to enter with Juniper, using her as a bargaining chip.

Sam , Clara, Morazzi & Helen argue but agree to help Sam after a blood oath then ride … a giant worm demon up a mindshaft. Juniper is slowing going to be used by the Generals men when she lights things up while Sam and his group are surprised that Clara isn’t what she claimed to be.

Tony Parker is a rising star in this industry and this issue is another reason why. Clean lines with bodies, backgrounds and more full of detail. A nice style that flows, kind of like Gary Frank but a little sharper and simplier. The demons look horrifying. The different types of people look distinct. There is a mixture of modern and surreal for the backgrounds of Hell which make it a little disorienting but in a good way. Parker brings us kinetic action, great emotion and solid panel work that conveys a story on its own.

Wes Hartman’s colors amplify the effects of Parker’s art so well. The shading is excellently used in this issue with great use of color. Overall, a wonderful job.

Pak gives us his usual magic, allowing characterization shine through the main plot. Here are a group of people who have separate ideals but one agenda that they all share … they want out of hell. Sam just refuses to go without his sister. The blood oath was definitely a big turning point this issue, as we saw what Clara will do and what Helen will do as well as Sam.

I felt that Morazzi had little to do this entire issue and could have been replaced by someone else.  Although seeing Captain Frank with the General in the City of allowed for even more possibilities in terms of story and character but Pak clearly shows that we’re nearing the end.

I love the mixture of demonic elements with modern tech that we see in Hell. It makes the most of what Pak is doing with this version of Dante’s Inferno. Yet … my main gripe is that for all that Pak shows us in the book, I still am not sure what the General or Frank want with the innocent and, as mentioned before, Morazzi is just kind of there.

Still, overall, a solid issue with a great twist at the end.

Stunning art. Good story. Great way to end the issue even though there are a few things that could have been better. I think that if Dead Man’s Run was longer than six issues, maybe 8 or so, this issue wouldn’t feel so condensed. Still, a good read.