Do You Like Your Aliens Bi-Sexual: A Voodoo #1-8 Review


TALE OF THE TAPE

Long time ago, during 1993, Jim Lee had joined 6 other artist to form what is now called Image Comics. His studio, Homage, grew and became Wildstorm. Jim Lee's first book with Image Comics was called WildCATS. WildCATS has become a very popular property;so much so that it had a 13 episode cartoon series on CBC back in the 90s. Then it was reran on USA. The team comprised of many characters ... Grifter and Voodoo among them.

Voodoo was introduced as a stripper who can see the alien Daemonites within the humans they possessed. She joined the WildCATS and Alan Moore had unlocked much potential with her; giving her training from Zealot to her being part Daemonite herself, Voodoo had gone from the whiny girl to a kick ass fighter.

Fast Forward to September last year, the new 52 titles were coming and the Wildstorm characters had gotten intergrated into the new DC Universe. Grifter and Voodoo both getting their own series. How does Voodoo pan out? I'll give you that answer.

Voodoo starts with our main character ... on all fours in a strip club called the Voodoo Club, dancing. Want to get attention right away, huh Marz? And attention she gets as many men and at least one woman are  staring at our man star as she strips off her top. The woman and one of the men in question are Special Agents Fallon (the woman) and Evans (one of the guys).They argue about them keeping tabs on their target and Fallon mentions how she does not want to be there. Evan states how he wants to stay close while Fallon reminds him that they are not to engage without executive orders. Evan's just watches Voodoo . .. much to the disgust of Evans who leave ... and finds herself beating up 3 guys outside the club before going back to the hotel.

Voodoo shakes her ta tas and body some more while Evans gets a  . .. waitress at the strip club to give him Voodoo's real first name; which is Priscilla. After a small but interesting scene where Voodoo talks to the other strippers about helping each other and how men put down their defenses ...and wallets while they are at the strip club, she ends up being called into a private room where she was told that a customer wants a private dance. She enters the room and low and behold . . . it's Evans.  Evans and Voodoo have some flirting banter as she removes clothes still Evan's pushed a conversation about her past. Voodoo gives a story  about being a 'mixed-race' which Evans calls bullshit on.

Evans proceeds to ignore a call from Fallon while telling Voodoo that he's a special agent and that they are on to her being an alien with shape changing and telepathic abilities. Then the smart special agent goes on about how they are gonna strap her down, cut Voodoo open and study her so they can know how her 'species' operates. Voodoo locks eyes to get a great telepathic visual which prompts her to slice open Evan's with her hands after she shape shifts to her real form. After killing Evans, Voodoo walks out, fully clothed, saying she quits. Fallon calls Evan's cell again but Voodoo answers it after shape-shifting into Evans herself.

Fallon and 'Evans' romp around in bed while talking over details as to when they are supposed to attack Voodoo. The phone rings once but 'Evans' convinces Fallon to ignore the phone to fool around more. After more talk of the attack on Voodoo and how they could lose their jobs over what they are doing, naked 'Evans' crawls out of bed and goes to the bathroom. While in the bathroom, Fallon gets another phone call. Inside the bathroom, ' Evans' shape-shifts back to Voodoo and decides to leave. Fallon drops her cigarette as the call says they found Evans in the Voodoo Club ... dead.

Fallon goes to the club to look over what happened to Evans and vows to get Voodoo. As Voodoo, now clothed, tries to get out of town as quickly as possible, she runs into her first encounter with the Black Razors  and Black Jack, who looks like Captain Atom Pre-New 52 but all black with white accents and a star in his chest. Fallon makes it to the site where the Black Razors corner Voodoo. Black Jack tells Fallon to back off only to be reminded that she out ranks him and that she will get the alien woman. After a quick chick fight, Voodoo escapes ... walk right out looking like Fallon.

After a brief encounter with Green Lantern Kyle Rayner that proves to her that not all humans are bad, Voodoo marches on. During said encounter, Voodoo met with several other Daemonites who revealed that they were all half-breeds and that Voodoo's mission was to collect all he could about the super heroes on the planet Earth. She then broke into a government installation, in which Black Jack and Fallon are there reviewing their information on her and the heroes of Earth. Voodoo is able to get the information on the Earth's Heroes and escape in front of Fallon and Blackjack again.

Voodoo goes to a top secret archaeological dig where they found an old Daemonite ship. After killing two guards, she enters the ship.She heads inside the ship in hopes of contacting the Daemonite War Council about the information she has on the heroes.  When she enters, she finds a guy there. This guy had been chasing her for sometime. Come to find out that he's a full-breed Daemonite and detests any half-breeds; so he plans on killing Voodoo and taking her information. After a hard fight, she brings out an image of Grifter, which the other Daemonite fears, and she BITES HIS HEAD OFF .... GOOD LORD!

*plays the rap from Janet Jackson's  So Excited*

While Voodoo is having some head, we find that Fallon and Blackjack feel that they are at their wits end. Voodoo's slipped by them three times. They fear their bosses will want their heads as Fallon tells Blackjack they have one chance. The two appear at a secret installation that only few others, besides Fallon, actually knows about. Blackjack and Fallon take down Black Razors as they open the doors to find . ..

While Blackjack and Fallon are attacking guys they would be normally working with, Voodoo is accessing the information on the chip before ending it to her Daemonite masters when she finds a file called Mission Voodoo. As she opens it she finds . . .

That Voodoo is, indeed, a clone of the real Priscilla Kataen who was experimented on by the Daemonites. 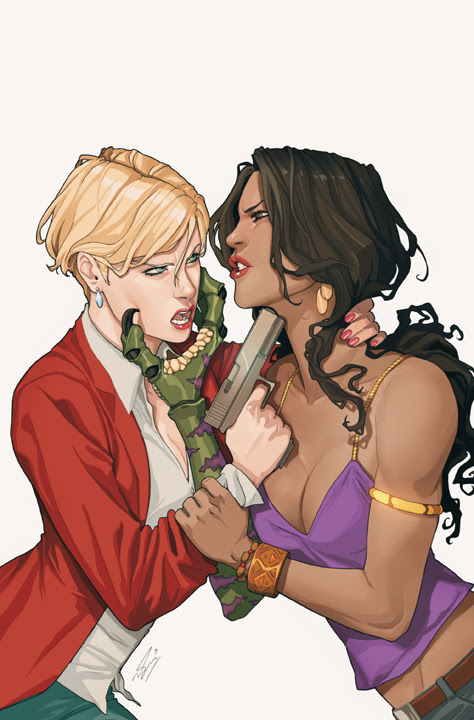 Voodoo is first rejected for a meeting with the War Council when she kills more Daemonites to prove her point. The Daemonites concede and begin to talk to Voodoo, point out how special she is as you find that she was the ONLY CLONE that actually worked. All the other clones were incomplete. She kills all the other clones, vowing there will never be another Voodoo when the Daemonites come to her with an offer.

Meanwhile, at a safehouse that Blackjack has, the three heroes talk over what is going on with Fallon saying that they need Pris to catch Voodoo when Pris decks Fallon; for knowingly letting her stay captive in that facility. Pris vows to take down her clone but also warns that she will never again be a captive. The three track down Voodoo's last movements to the now destroyed Daemonite ship (forgot to say that the bomb that Voodoo's . . . dance partner had left detonated).

As they look through the wreckage, Voodoo returns ... shifting her hands into an inhuman form. Pris, Fallon and Blackjack take on Voodoo as she kills Blackjack and . . . 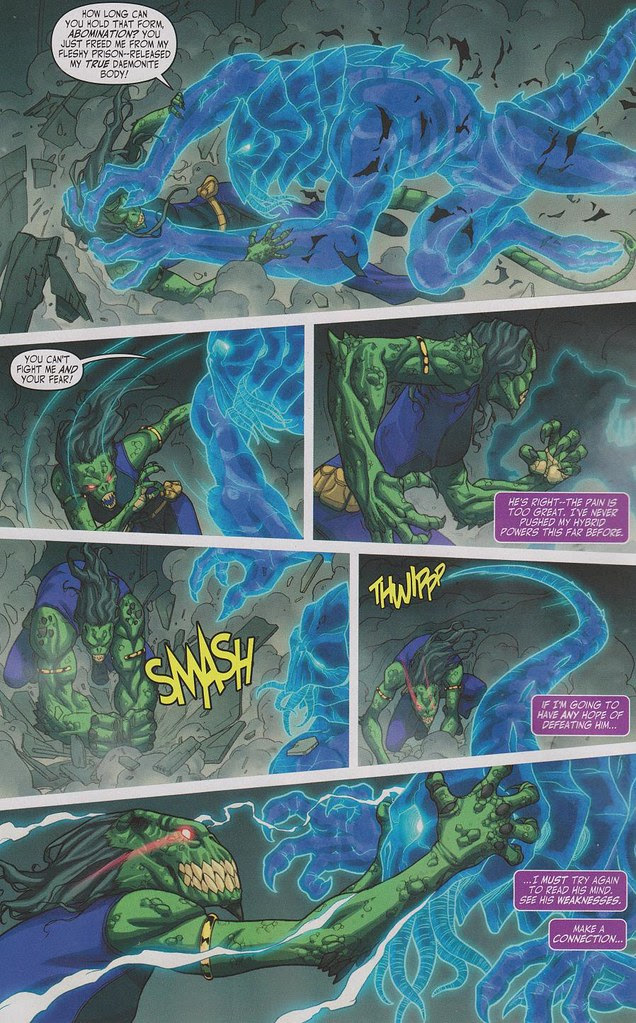 Voodoo was definitely something interesting and different amongst the new 52. And I liked it ... intitally. She was full of secrets. Her using sex and other easily relateable methods of gathering information were intelligent yet very gripping. Voodoo kept your attention . .. for most of it.

This book was one of the many titles mired in controversy when it first was released because of its sexual overtones, even with the Rated T+ on the cover. Yet, in the entire time of the initial writer, Ron Marz, wrote the book, the sexually never felt wrong, forced or out of character. Voodoo was a spy and that was played off very well by Marz. Williamson also did a good job with her but the tonal shift with Voodoo after he took control was very noticeable. And why, the story was still entertaining and pacing was still great, the shift seemed to hurt the book. The idea of a clone was a little rocky when first subjected to it but still fit within the confines of this first story arc.

With that said, both Marz and Williamson did a great job with the character. They wrote a very complex Voodoo. Yet, I think the clone really took away from what Marz had originally  intended as Voodoo became flat out evil instead of being a woman who is on the fence. In issue 3, we saw the conflict within Voodoo as she came across Kyle Rayner . .. finding that all humans might not be bad. That was a glimmer of what Voodoo could have been if Marz had stayed or not been let go. Williamson did the best he could and did a great job with characterizations. Except for Voodoo. Making a clone of her and giving any possible redeeming qualities to Priscilla felt like a cop out. I understand the idea behind having two similar characters and it makes sense ... yet still downgrades Voodoo and all that she could have been. Still,overall plot and pacing, Williamson did a great job of keeping the story going, interesting following what Marz started.

Sami Basri is a true wonderful find. While the style very simple, Basri is a true master of sequential art. Emotions are easily conveyed. One minute, Voodoo is seductive, sexy and innocent. The next, she is fierce, sly and horrifying. Basri gives panel after panel of quality work that really shines. Jessica Kholinne's colors for Voodoo have been amazing. Each panel is alive and vivid; each one matching the mood that needs to be conveyed with Basri's art. Every issue made me more excited with all the art I had seen.

Overall, Voodoo was a thrilling ride full of mysteries, interesting characters with very human motivations and wonderful art. There was something that always made you come back. The tonal shift between writers and splitting Voodoo and Pris hurt the book somewhat but overall, it was a good, solid ride to start out with. I enjoyed the book very much.

With that, I give the book a 4 out of 5. Which is a shame considering the book is cancelled as of September. Ah well. Here's to the formation of the WildCATs.